NRCM is working hard to bring plastic pollution solutions to Maine. Together, we can reduce Maine’s impact on this catastrophic global problem and provide inspiration for others around the world.

Plastic pollution in Maine is a more devastating problem than you may think. Plastic is present throughout the environment everywhere on earth. Maine is no exception. Plastic is polluting our waterways, coastlines, forests, and open spaces, choking wildlife, and making its way into the food web.

Town councilors could send a resolution to the Maine Legislature urging a statewide ban on the use of plastic bags. By Leslie Bridgers, Staff Writer Portland Press Herald news story Windham doesn’t plan to pave the way on banning plastic bags. But the idea, proposed by local eighth-grader Sierra Yost, could be considered on a END_OF_DOCUMENT_TOKEN_TO_BE_REPLACED 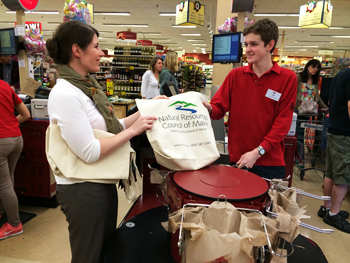 NRCM helped put together a special event at the Maine State House to raise awareness about using reusable bags.

NRCM Statement at the Kickoff Press Conference for “Got Your Bags, Maine?” by Matt Prindiville, NRCM Clean Production Project Director “Mainers use and dispose of more than 700 million shopping bags a year.  That’s more than two million bags thrown away every single day.  These bags end up in landfills, on our streets as litter, END_OF_DOCUMENT_TOKEN_TO_BE_REPLACED

by Kathryn Skelton, staff writer Sun Journal news story Hannaford supermarket will give away an estimated 70,000 to 80,000 reusable tote bags at two stores in Augusta, and one in Winthrop, at the end of July as part of a push to ween more customers off paper and plastic bags. Spokesman Mike Norton said combined, END_OF_DOCUMENT_TOKEN_TO_BE_REPLACED