Keep Maine’s Bottle Bill—My “3.5-cents” Worth on the Topic

Imagine our roadsides littered with cans and bottles again. Can’t? Neither can I, because Maine was one of the first states to pass a bottle bill back in 1976. NRCM was very involved with this initiative. Since then, Maine has achieved the highest beverage container recycling rate in the country at 90%. It has also helped create 1,200 jobs in Maine, at big recycling companies like Clynk that services Hannaford stores, to small redemption shops, like the one at the end of my road in Jefferson where I drop my bottles off.

And then there are the connected community benefits provided to my neighborhood Girl Scouts, sports teams, and other kids’ groups that empty out my bins in the garage on their bottle drives.

The beverage industry, led by Coke and Pepsi, has tried to get the Maine Legislature to repeal this popular bill for decades – without success – and now they are at it again. Why? Because they feel emboldened by the larger environmental rollback agenda being forwarded by the new Legislature. And because they don’t like paying the 3-4 cents per container that is required of them to take care of their waste product. Consumers get 5 cents to 15 cents, depending on bottle size.

Data don’t lie. States with bottle deposit laws recycle between 74% and 95% of their bottles and cans.  For states without bottle bills, the average recycling rate is a dismal 24%. Without the cash incentive, we know from other states without bottle bills, that containers would be either back on the roads or towns would be paying for their disposal at landfills. Current proposals to exempt larger bottles could take away up to one-third of the revenue generated for recycling, which has, in turn, generated jobs like those held by my neighbors down the road.

I often hear stories of Maine kids who go to other states and can’t believe the amount of cans and bottles strewn along the roads. Makes me glad to be from Maine. Stand up for a strong bottle bill. As the saying goes, if it ain’t broke, don’t fix it. 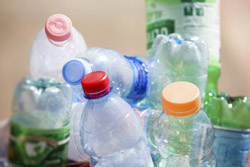 And offered their opinion: Bottle Deposits Work, So Leave Them Alone

Lisa Pohlmann brings to her leadership role a deep passion for the environment and a strong history of advocacy for the people of Maine. Lisa joined the NRCM team in 2000 as a member of the Board of Directors, later serving as board president. She has been the CEO since 2011. She has a Doctorate from the Muskie School of Public Service at the University of Southern Maine. Lisa enjoys big-picture thinking and has a knack for engaging NRCM’s staff, board, and others in exploring opportunities and innovative ideas for protecting Maine’s beautiful environment. A resident of Jefferson, Lisa has had a lifelong love of the outdoors, and regularly kayaks, hikes, skis, and camps across Maine. Her favorite way to enjoy Maine is in a kayak or canoe on a river and has paddled the Allagash, Moose, Narraguagus, Kennebec, Penobscot, Sheepscot, Cobboseecontee Stream, St George, and East and West Branches of the Penobscot, and the lovely, marshy outlet streams of many Maine lakes.