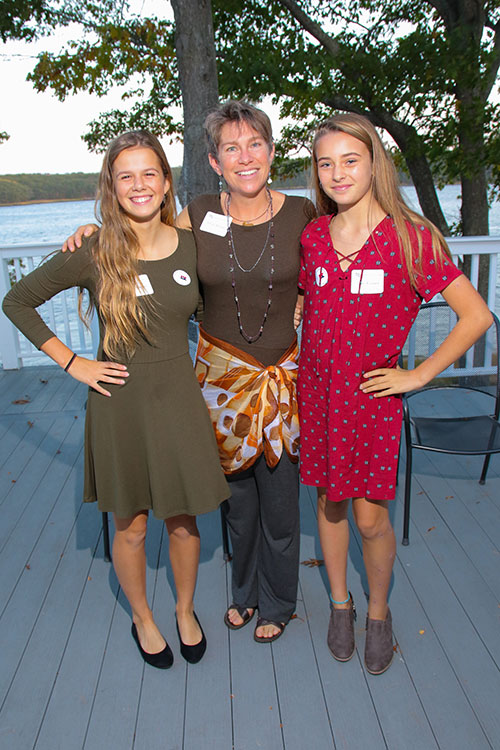 King Middle School teacher Jillian Roland with Lainey Randall and Addie Farmer, who received the 2017 People’s Choice Award. Lainey and Addie said that Ms. Roland inspired and supported them in their work to protect Casco Bay from plastics pollution.

We want to thank all of you who nominated someone for this year’s NRCM’s People’s Choice Award. We received more than 40 nominations, and narrowing the list down to this year’s six finalists was not easy. We want to thank all of the nominees for their dedication and hard work to protect Maine’s air, land, water, and wildlife. You all are doing such great things to keep Maine special.

Leslie Clapp is an advocate not only for birds and wildlife, but also for the habitat that supports them. She has been the (volunteer) president of Downeast Audubon for over a decade, and in that time has helped the organization provide important environmental education opportunities for local school kids, provided important habitat for birds and other creatures in her own yard, and given numerous workshops and tours for the community on landscaping for wildlife. Leslie spearheaded the establishment of a “Bluebird Trail,” more than 230 bluebird boxes that she and her husband built and mounted on posts, cared for and monitored by volunteers, mostly trained and organized by Leslie.  Last year 127 Eastern Bluebirds, 486 Tree Swallows, 124 Black-capped Chickadees, and 5 White-breasted Nuthatches fledged from these boxes. Every year she organizes and participates in the “Birdathon” fundraiser, a monumental effort that funds nature presentations (such as the live animal presentations from Chewonki) and field trips to local school classrooms, as well as sending a range of ages of local kids to summer camps about birds, oceanography, and other nature topics. Encompassing 10 acres, her home gardens, fields, woods, and pond are not only beautiful, but are also managed as prime wildlife habitat. Bird feeders, shelter such as brush piles—both casual and structured, water features, and natural food sources for both birds and pollinators—abound.

Leslie is one of the main “go-to” people for information on nature and wildlife on the Blue Hill Peninsula and on any given day you might find her working on wildlife-related projects, getting bluebird boxes ready to install, out monitoring her own bird boxes, or even rescuing an injured bald eagle and transporting it to a rehabber who will help it. Leslie is an inspiration for aspiring naturalists and those who want to garden for birds and pollinators!

Holly has been a tireless volunteer for Biddeford’s Main Street. Starting five years ago, she began filling in downtown areas with native plantings. The effort has grown to official City of Biddeford sanctioning and now our entire Main Street has planters tended by volunteers and local businesses. Even more notably, Holly has reinvigorated a long-unused community garden called Pierson’s Lane in a part of town that has really needed some attention and investment. “Today, as I write this, she has 18 children who live in that neighborhood working in the community garden. These are kids that probably would otherwise not be outside,” wrote Martin.

Holly initiated the adopt-a-park program, which is a collaboration between citizens and the municipality to take leadership in park upkeep. Because of Holly’s work this program has continued for five years and hundreds of volunteers have participated and are engaged in the community.

Holly is the first one to get her hands dirty. She is in the parks, cleaning the parks, growing food, but also talking to everyone she sees. A young family may walk by and she will encourage them to come over and start gardening with her. Because of Holly’s work, our green spaces are accessible to all, in a community where not everyone has access to a backyard or a patio. When we hold free festivals in Mechanics Park or our weekly music series in Shevenell Park, we can do so because of the community engagement, following Holly’s leadership, to take care of these parks. As the positive activity in the parks has grown, so has awareness of the parks’ value for community and economic development, and that has inspired the city to continue to reinvest in its parks and its downtown. Holly’s efforts have been multiyear, passionate—and without recognition.

Bow Seat Ocean Awareness Programs launched the Marine Debris Creative Advocacy Competition this year to challenge middle and high school students nationwide to carry out a campaign that educates the public about marine debris and stimulates behavior change and action. Addie and Lainey participated in the competition and rallied their community to become ocean caretakers. As residents of Portland, Addie and Lainey are surrounded by beautiful ocean views … and the litter that pollutes them. They understand the harmful impacts of marine debris on their coastal community, so they launched a campaign to raise awareness of and inspire action around marine debris by introducing NOAA’s Marine Debris Tracker mobile app to their community. This app is a simple tool for users to track the litter they find at their area beaches, to assist with data collection to ascertain the local marine debris problem.

They set an ambitious goal for Portland to collect and log 5,000 pieces of trash in about a month. They conducted multiple outreach activities to inform local residents about the Marine Debris Tracker app and to activate them in protecting their oceans. Those activities included communicating in school to teachers, parents, and students through posters, newsletters, morning announcements, and events; testifying before the Portland City Council,; and presenting at the Gulf of Maine Research Institute. They concluded their campaign with a cleanup and tracking day at East End Beach in June and were joined by 30 volunteers who picked up litter and used the app to log in data –collecting nearly 6,000 pieces of trash, bringing the month-long total to almost 8,000 items – 3,000 over their initial goal! According to data from NOAA, residents have continued to pick up and track the litter in their community.

Marcia co-founded the entire Bring Your Own Bag campaign in Midcoast Maine after being heavily involved in the efforts in Portland. Without her leadership, organization, and persistence to keep things moving, the bag and foam ordinances, passed not only in her own town of Brunswick but Topsham, too, wouldn’t have happened.

Marcia exhibited extraordinary leadership over the two years it took to meet our goals. She was extremely organized, sought out data from other communities and their experiences with eliminating these products, and she initiated meetings with our legislators. BYOB met often and interviewed retailers to see how they felt about our proposals; for the most part the group gained their support. Marcia’s energy and determination kept the team going, and those of us in Topsham learned about citizen’s referendums and collected more than 600 signatures to get the issue of a five-cent fee on single use plastic bags onto the ballot last fall. We ultimately succeeded in getting foam food and beverage containers banned from use in restaurants in both Topsham and Brunswick. Topsham approved the fee on single-use plastic bags; now many more shoppers are bringing their own reusable bags. Brunswick approved an ordinance aimed at reducing the use of plastic bags in most stores. Many nearby communities have followed our path and Marcia has offered to confer with communities on how to best proceed.

Yvette wrote, “Marcia has been an inspiration to me. She has motivated me to move outside of my comfort zone to stand up for causes I believe in, in ways I didn’t think I had courage to do.”

Melanie has served as co-chairs of MUUSAN’s (Maine Unitarian Universalist State Advocacy Network) Climate Change group for the last three years. She’s tirelessly advocated for the earth with her outreach to fellow UUs in Maine, with her numerous letters to the editor, and her devotion to understanding the complicated solar policy issue. Melanie is also a Master Naturalist through the Maine Master Naturalist Program. In order to be awarded that title, she completed a lengthy training that culminated in her capstone project, “Nature, Up Close & Personal,” consisting of a series of beautiful photographs of living things nearly hidden to the eye because of their camouflaged appearance. Melanie shares this presentation with community groups, encouraging folks to guess at what they’re seeing. I’ve had the joy of experiencing this presentation. It’s engaging and fascinating. As part of the Master class Melanie also helped lead a 4th grade class at Hidden Valley Nature Center, and she mentors others who are going through the Master Naturalist program. This work is inspired by Melanie’s love of the natural world and her goal of helping others appreciate the beauty of nature and advocate for the natural world.

Melanie has moved out of her comfort zone to learn how to lobby legislators, make phone calls to urge others to speak out, write letters to the editor, sit in legislative hearing rooms testifying on energy bills (including staying to monitor the entire day’s testimony), participate in rallies—all while serving as a powerful example for the rest of us in how to take positive action on behalf of the environment. She said recently that much of the discussion about clean energy and climate change revolves around financial considerations and jobs. But, she said, for her, it’s all about standing up for her values for clean renewable energy, preserve wildlife habitat, and saving “critters” from extinction.

Buck O’Herin of Montville
Nominated by Kathy Sparrow
Buck O’Herin has been a key player in helping the Palermo Consolidated School with its nature trail and outdoor classroom development on town land behind the school. This project was first supported with a grant from NRCM’s Middle School Grant Program in 2016, and Buck has continued to mentor the staff and students through the 2017 school year. The school would not have a nature trail without Buck. He taught students and teachers how to map and mark the trail, install bog bridges, and put up signage. He taught Erskine High School students how to work on the trail. His knowledge of forest lands and waters paired with his dedication to getting kids outdoors has made an invaluable contribution to the Palermo school and community as well as many others in the Midcoast area.

Buck has been doing education and conservation work for more than 30 years. He has been with the Sheepscot Wellspring Land Alliance since 1999 as a board member and for six of those years was the land trust’s first executive director. Now he is the Vice President of the Midcoast Conservancy Board of Directors. Buck is a founding participant of the Waldo County Trails Coalition that is working to build a 45-mile recreational footpath from Belfast to Unity.

The nominations do not represent endorsement by NRCM of any particular environmental position, strategy, or viewpoint.