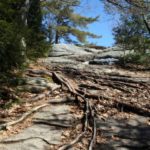 Bradbury Mountain State Park, Pownal, Cumberland County: Bradbury Mountain is an 800-acre state park in Pownal. Though elevation reaches only to about 500 feet, the mountain's peak offers great views of Casco Bay and surrounding farmlands. The land was acquired by the federal government of the United States in 1939. The state park was founded in the 1940s. Its borders were extended in the 1990s and 2000s across Maine Route 9 with the addition of the Knight Woods parcels. It was one of Maine's original five state parks.  View More