Statement by Brownie Carson to the Board of Environmental Protection Good afternoon. The Natural Resources Council has been grappling with the question of how to bring clean air to Maine for a long time. During my 17 years at the Council, we have participated as an intervener in many licensing proceedings, and we have commented END_OF_DOCUMENT_TOKEN_TO_BE_REPLACED

Comments by Sue Jones, Energy Project Director The Natural Resources Council of Maine appreciates DEP’s significant efforts in reviewing the comments submitted in the Chapter 145 rulemaking and in developing a proposal for your consideration today. With all due respect, however, the NRCM believes that DEP has not presented the best plan for the people END_OF_DOCUMENT_TOKEN_TO_BE_REPLACED

Statement by Brownie Carson, NRCM Executive Director We are here today to announce that more than 1,000 Maine people from 230 towns support cleaning up the Wyman Station power plant – Maine’s largest single source of air pollution. These people come from nearly half the towns in Maine, and they are speaking out today for END_OF_DOCUMENT_TOKEN_TO_BE_REPLACED 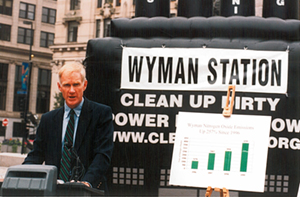 PORTLAND AND BANGOR – Against a 25-foot-high inflatable power plant backdrop, Maine citizens held news conferences in Portland and Bangor to announce that they have collected and submitted 1,043 signatures, from residents of 230 Maine towns, to the Board of Environmental Protection (BEP) in support of the board’s preliminary vote to require Florida Power and END_OF_DOCUMENT_TOKEN_TO_BE_REPLACED

(AUGUSTA, Maine) Total emissions of the harmful pollutant nitrogen oxides (NOx) increased 45% – by an additional 1,302 tons – at the Wyman power plant outside of Portland between 1998 and 1999, according to figures released today by the Natural Resources Council of Maine. NOx emissions per unit of energy (Btu) generated, also increased. Florida END_OF_DOCUMENT_TOKEN_TO_BE_REPLACED