Portland vote lifts hopes of environmentals wary of pipeline By David Abel, Globe staff Boston Globe news story SOUTH PORTLAND — Since World War II, fleets of oil tankers from around the world have sailed up to the long jetty in this placid harbor and unloaded their crude into a 236-mile pipeline that pumped it to END_OF_DOCUMENT_TOKEN_TO_BE_REPLACED

Conservation groups and other areas celebrate the city’s stand against the heavy crude, as opponents map out strategies for overturning the new regulation. By Leslie Bridgers, Staff Writer Portland Press Herald news story South Portland officials are preparing for a legal battle with members of the oil industry over a City Council vote Monday to END_OF_DOCUMENT_TOKEN_TO_BE_REPLACED

By Roger Drouin Grist news story Citizens trying to stop the piping of tar-sands oil through their community wore blue “Clear Skies” shirts at a city council meeting in South Portland, Maine, this week. But they might as well have been wearing boxing gloves. The small city struck a mighty blow against Canadian tar-sands extraction. END_OF_DOCUMENT_TOKEN_TO_BE_REPLACED

by Susan Sharon NPR news story South Portland, Maine, is known as the place where Liberty ships were built by tens of thousands of workers during World War II. Now, the city’s waterfront is home to an oil terminal and the beginning of a 236-mile-long pipeline. For more than 70 years, the Portland Montreal Pipeline END_OF_DOCUMENT_TOKEN_TO_BE_REPLACED 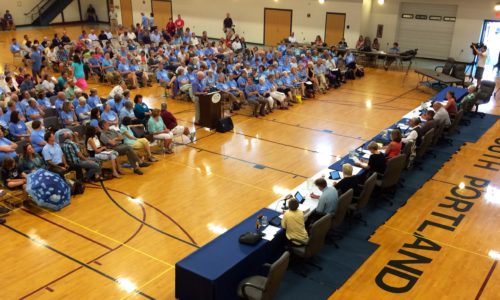 by Kate Irish Collins KeepMECurrent news story SOUTH PORTLAND – After a roll call vote that came more than three hours after the start of its meeting Monday night, July 21, the South Portland City Council gave final approval to a ban on tar sands-oil that’s been dubbed the “clear skies ordinance.” As expected the END_OF_DOCUMENT_TOKEN_TO_BE_REPLACED

by Danielle Waugh WCSH-6 news story SOUTH PORTLAND, Maine (NEWS CENTER) — With a 6-1 vote, South Portland City Councilors have made history by passing an ordinance to block the loading of crude oil, including tar sands oil. According to the Natural Resources Council of Maine, South Portland is the first community to pass such END_OF_DOCUMENT_TOKEN_TO_BE_REPLACED

By Darren Fishell, BDN Staff Bangor Daily News news story PORTLAND, Maine — The South Portland City Council has effectively banned the export of tar sands, or oil sands, from its waterfront with an ordinance that has gained international attention and that oil industry opponents have vowed to challenge in court or before city officials. END_OF_DOCUMENT_TOKEN_TO_BE_REPLACED 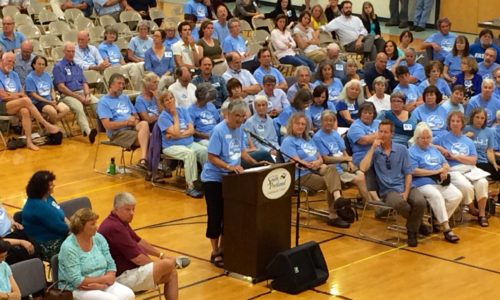 Comments of Lisa Pohlmann, Natural Resources Council of Maine Executive Director We again would like to congratulate the City Council for its diligent and transparent management of this process. Protecting the health and well-being of the people of South Portland is an enormous responsibility. Mayor Jalbert: you and the rest of the Council have risen END_OF_DOCUMENT_TOKEN_TO_BE_REPLACED