Citing Maine’s ‘home rule authority’ to protect public health, the small city took on Big Oil, which lined up behind a company challenging its tar sands ban. By Sabrina Shankman Inside Climate News news story A federal judge has ruled that the coastal city of South Portland, Maine, did not violate the U.S. Constitution when END_OF_DOCUMENT_TOKEN_TO_BE_REPLACED

by Juliette Laaka The Forecaster news story SOUTH PORTLAND — The lawsuit challenging the city’s Clear Skies Ordinance is scheduled to go to trial June 18 in U.S. District Court. The City Council transferred more than half a million dollars to the ordinance defense fund Tuesday in anticipation of the trial, and approved zoning changes END_OF_DOCUMENT_TOKEN_TO_BE_REPLACED

It is yet another battle pitting big energy profits against the public’s right to a safe environment. by Jake A. Plante, resident of Brunswick and author of “Uncle Sam and Mother Earth: Shaping the Nation’s Environmental Path” Portland Press Herald op-ed BRUNSWICK — Sometimes history is made in our own backyard. That’s happening with South END_OF_DOCUMENT_TOKEN_TO_BE_REPLACED

At the heart of the legal fight between South Portland and a pipeline company is the issue of ‘local control,’ and whether a community can block an energy project. By Sabrina Shankman Inside Climate News news story SOUTH PORTLAND, Maine—A federal judge has handed a win to South Portland, Maine over a pipeline company that END_OF_DOCUMENT_TOKEN_TO_BE_REPLACED

The judge may rule next on the merits of Portland Pipe Line’s challenge to the city’s Clear Skies ordinance, which blocks the flow of Canadian crude oil to South Portland. by Kelley Bouchard, staff writer Portland Press Herald news story Judge John Woodcock Jr. opened his written order issued Tuesday with a weary-sounding reference to END_OF_DOCUMENT_TOKEN_TO_BE_REPLACED 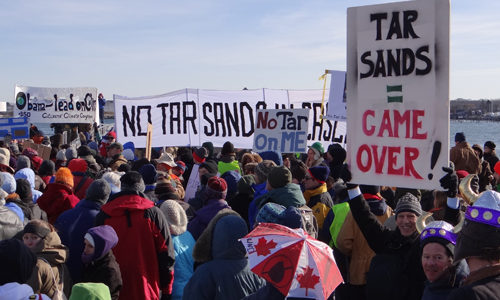 Statement of Dylan Voorhees, Clean Energy Director, Natural Resources Council of Maine NRCM news release Today, President Obama announced that he has rejected the request from a Canadian company to build the Keystone XL oil pipeline, which would have transported tars sands oil from Alberta, Canada to the Gulf of Mexico. “Today’s announcement by President END_OF_DOCUMENT_TOKEN_TO_BE_REPLACED