Duck season has been over for six weeks, and I am finally recovering from my post-season depression.  I think most hunters know what I am talking about.  For three months, I knew exactly what I would be doing with every second of free time, and even car trips for work or other tasks had an additional sense of purpose: scouting.  My eyes often wandered from the road looking for ducks and always hoping for a new spot to hunt (of course, I don’t recommend this method of scouting while driving, but I can’t help it). 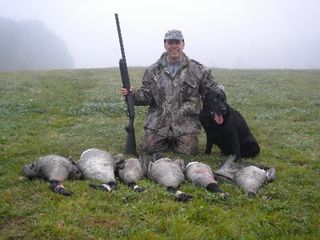 Waterfowl hunting provides me with so many ways to enjoy the glory of Maine, from the warm, September days of early goose season ponds in Central Maine through bitter, dark December mornings in Casco Bay.  There is nothing quite like the power of life that duck hunting allows me to see.  One early morning in October, I got up around 4 am to pouring rain and wind, not the most fun to hunt in, and at least in my experience, not great weather for ducks (many say the snottier the weather, the better the hunting, but I wonder about this).  I went to a small pond near where I live in Hallowell, and my partner for the morning, who rarely if ever hunts in the rain, didn’t show.  His loss.

When first light came, the rain stopped, the wind picked up, and the sky filled with ducks.  This particular pond is very small, less than a mile long and half a mile wide.  It’s just a guess, but I think there were four hundred ducks over the pond, and they stayed there a long time.  I had many hurtling into my decoys.  I shot worse than any other day last season, getting only one duck for 30 rounds of Hevishot shells. (Duck hunters must use non-toxic shot.  Many use steel, but I prefer Hevishot, which is a tungsten-iron mixture and denser than steel, making it more effective.  It’s also expensive at $2-3 per round!) I think that the ducks — swarming almost like hornets from a disturbed nest — had me completely in awe and totally flummoxed.  They fly in large flocks to distract avian predators, and it works on the human kind as well.  Needless to say, my lab, Percy, was not happy with me and was flummoxed himself as to why so much noise resulted in so few opportunities for him to retrieve.

Seeing ducks is always great, and there is nothing like watching these aerobatic natural fighter jets scream towards you and set their wings.  But even more impressive is the duck swarm — when hundreds of ducks fly in ever rising circles like angry hornets or bees.  Although we all see ducks so commonly that they barely catch our attention, I doubt many have seen the swarm.  I only saw this twice last season, first at the small pond near my house, and then in December on a flat calm, warm day in Maquoit Bay near Brunswick.

“Flat, calm, and warm” are definitely not good words for duck hunters to hear.  Ducks often move when they need to feed, which they need to do more when it’s cold, or when they want to get out of the wind.  “Flat, calm and warm” means ducks are happy where they are and don’t fly toward hunters’ decoys.  On this particular day, most observers would conclude there were, in fact, very few ducks in Maquoit Bay at all.  I knew differently, and a boat that traversed the far shore from my blind proved the point.  As the boat went by, the ducks swarmed.

This time, there were thousands of birds in the swarm, slowly circling and filling the sky.  Many had come in the past few days, which had been very cold and finally froze up inland ponds and streams.  Some will still be in Maine waters now and others will have long since flown south.  I was lucky to glimpse a big piece of this huge annual migration.  I wonder how many people around Maquoit Bay get to see the duck swarm and are aware of the massive scale of the migration happening right under their noses.  Not many, I suspect, and most are probably duck hunters.

As I think about last season and readjust to life without duck hunting, I worry a bit about the future.  How many of the ducks I saw this year will be affected by the BP oil spill?  Here in Maine, there are proposals in the Legislature that could harm duck habitat and hunters’ ability to hunt.  One proposal would reduce the shoreland zone from 250 feet to 75 feet along lakes, rivers, wetlands, and the coast.  Other proposals would reduce the buffer around vernal pools, which Wood Ducks use for nesting, and around areas that Inland Fisheries and Wildlife considers especially important habitat for waterfowl. This will allow more development to encroach on places where ducks nest and roost, potentially reducing duck numbers.  Most duck hunting is done from shore and to hunt legally, one must be 300 feet from houses.  If development is pushed closer to the shores of our waters and wetlands, there will be fewer and fewer places for duck hunters to hunt.

Duck hunting is my true outdoor passion, and a huge part of what makes Maine a wonderful place for me to live.  I don’t want that to change, and I hope there are many other duck hunters out there to help make this point loud and clear to legislators who want to role back protection of the places ducks live and hunters hunt. To stay informed about this legislation and actions you can take to protect Maine’s environment, join the Natural Resources Council of Maine’s Action Network.

Nick Bennett, NRCM’s staff scientist and watershed project director, is an avid duck hunter.  He’s also dabbled with much less success in bird hunting, deer hunting, and rabbit hunting.  He’ll be writing a regular blog on hunting and environmental issues, with guest appearances from time to time by other hunting and fishing enthusiasts.