The Worst Duck-hunting Season Ever

On January 31, 2012, I finally got around to my first blog entry since hunting season started in October. I’ve been delinquent again and I’m sorry about it. But there is something fitting in writing my blog on the last possible day to duck hunt in Maine.  Unfortunately, I didn’t make it out hunting that day, but I did get out for one day of sea duck hunting in January with my friend Mark and a guide—John Nowinski of North Creek Guide Service. For anyone interested in sea duck hunting, I recommend him. I’ve been out with him four times and he’s always found us birds. He has taken us to ledges quite far off shore in Casco Bay where I would not have the guts to take my own boat, and he won’t take you out hunting unless the weather is safe. This is a winning combination.

Anyway, we had a spectacular morning and saw hundreds of birds. I shot two enormous Common Eiders (it never ceases to amaze me how big they are) and missed a third that I should have gotten. My friend Mark got an eider, two Long-tailed Ducks, and two Surf Scoters. He shot well. 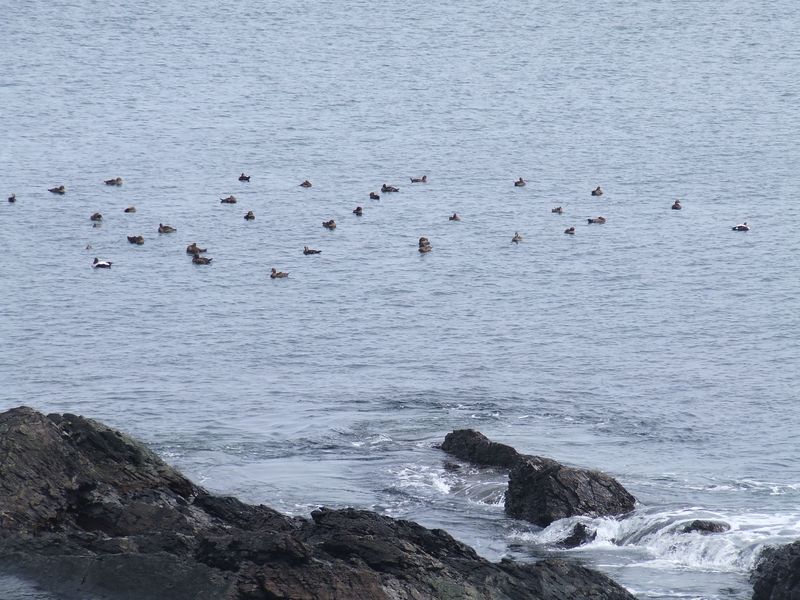 (Common Eiders off the Maine coast)

It was great to end the season this way, because honestly, it was the worst duck season I have ever had.  This was surprising given a promising start. In the first week of October, duck numbers seemed high, and there were more Mallards relative to teal and Wood Ducks than I can recall seeing in any previous year. But after the first week, these birds either fled south or dispersed to small waterbodies where hunters would not find them. This, in and of itself, is not unusual. However, as the weather gradually becomes colder, new birds usually arrive from the North and make for more interesting hunting (birds that are new to an area are less educated about where hunters might be). Eventually, in a typical year, the smaller waterbodies in the middle of the woods start to freeze up in November, and birds move back to larger waterbodies. Again, this helps keep the hunting interesting.

By December, usually even the large lakes and rivers start to freeze and then coastal hunting becomes excellent. Diving ducks—whistlers and Buffleheads—come down from the boreal forest in large numbers and appear in Casco Bay. Large black ducks, known as Canadian red legs because their legs are redder than Maine ducks from a diet rich in crabs, also come down from Canada. It is really a thrill to get one of these large, black ducks! Even the Mallards head for the salt water when things really freeze up inland.

This year, this great, rhythmic movement of ducks just never quite materialized during the season because of the incredibly warm temperatures. The way I see it, global warming wrecked my duck season.  The other hunters I know all had bad seasons, too, so I was not alone. So this is a part of my excuse for not writing a blog entry in so long. I just don’t have many good stories from this year to tell.

There was another threat to ducks I had to cope with this fall in addition to global warming. This came from closer to home in the form of a bad proposal from the LePage Administration to dramatically loosen restrictions on development near important wetlands for waterfowl.  Last legislative session, we successfully fought off most of the rollbacks that the Administration proposed that would have threatened duck habitat. However, the Legislature did ask the Department of Environmental Protection (DEP) to develop a permit-by-rule (PBR) process for inland waterfowl and wading bird habitat (IWWH) wetlands. PBR is a streamlined permitting process to allow development to proceed more quickly than under a full permit. At the time, NRCM was comfortable with this proposal because there is a PBR process for vernal pools that works reasonably well.

However, DEP’s initial proposal allowed too much development too close to waterfowl wetlands. NRCM worked hard to strengthen the proposal. For the most part, we succeeded. We gave strong testimony in front of the Board of Environmental Protection (which needed to approve DEP’s proposal) as did many others. There was particularly compelling testimony from a retired Inland Fisheries and Wildlife biologist and a world renowned ornithologist on the importance of maintaining large, undisturbed buffers around wetlands so that waterfowl and wading birds can nest and rear their young successfully.

The BEP listened to this testimony and significantly increased the setback required for development under permit-by-rule. NRCM also would like to have seen restrictions on the type of development allowed under PBR. For example, we argued that gas stations should require a full permit because of the risk of a catastrophic spill from underground storage tanks into wetlands. Although the BEP did not require this restriction, we do feel that the increased setback requirement helps lessen the risk from spills. The Legislature still needs to give final approval to the PBR proposal. So far, we are not hearing that this will be a problem, but as a famous philosopher once said: it ain’t over till it’s over.  We shall see.