A brief warning to readers before proceeding: this story could make you a bit queasy.

Queasy doesn’t even begin to describe how I felt.

I’ve never been a picky eater. My parents demanded that I eat everything on my plate, whatever it was. I remember as a kid dreading Easter dinner at my grandparents’ house because they always served a very salty country ham (and they didn’t cook it enough, either). I hated that ham, but I did my best to eat what I could. The rest went into my pockets or if I were really lucky, to a dog under the table.

I like country ham now, if it’s cooked thoroughly, and I am one of the least picky eaters I know, so I guess my parents’ rigidness in this department paid off. Being able to eat almost anything has been a survival skill that has served me well over time. After college, I lived in Japan for a couple of years.  A favorite game of my Japanese friends was to dare me to eat many types of exotic food (raw horse and cod fish testis are two good examples). They hoped I would find these exotic items repulsive, but I never did. I liked almost all of them. This was such a disappointment to my friends that I actually had to pretend to dislike some Japanese foods. Since there weren’t any in reality, I just chose the ones I was less enthusiastic about, such as a type of pickled apricot that seems to show up almost everywhere in Japan.

As I said, the ability to eat almost anything has served me well – except once. When I was sixteen, there was a drought summer in Woods Hole, where I lived in the summer growing up. A small pond near my house, which was hard to get into because it had fairly deep water right up to steep rocks, now had an exposed beach because the water levels were so low. It was possible to wade into the pond, which was full of bull frogs. It was my father’s idea to get a bunch of the frogs and make frogs’ legs.

Please don’t be too angry with me. I wouldn’t do this today. Frogs are in enough trouble without the likes of me harvesting 50 of them to eat from a single pond. Although, as I guess is obvious, I’m not particularly squeamish, pithing and cleaning bull frogs isn’t all that pleasant. They scream.

Anyway, my father and I fried up the frogs’ legs in garlic and butter and they were quite good. In my odd household, it didn’t seem particularly strange to fry up the eggs from some of the egg-bearing female frogs and eat those as well. Shad roe was something I grew up eating. Why not frog roe? I was not immediately disappointed. The frog eggs were delicious.

A half-hour later, I had the worst pain in my stomach I have ever had and was violently ill. The same thing happened to my father. We called the poison control center in Boston and were connected to a doctor. He asked us: “How old’s the child?”  My father answered that he was 50 and I was 16. We both were obviously old enough to know better. 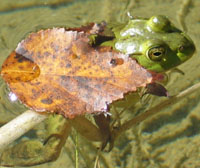 I’m still not 100% sure what caused us to become so sick. I’ve been told, there are toxins in frog egg sacs to deter predators, though I’ve not been told this specifically about bull frogs. Many of the frogs had also eaten American Toads, which are toxic. Perhaps some of this toxin was in the frog meat. I certainly learned to respect amphibians from this event, however. I love frogs and can watch them for hours in the little pond I have on my land here in Maine.

Right now, unfortunately, there is a ton of legislation in the Maine State House that will harm frogs and other amphibians. These bills include proposals to gut shoreland zoning and the laws that protect vernal pools, which are great habitat for frogs. Gutting these laws won’t hurt just frogs, though. Ducks nest in vernal pools and other wetlands, and the legal protections for these habitats are also under attack.

Wetlands also protect the quality of our drinking water, and we need the buffers around lakes that shoreland zoning provides to filter out pollutants and keep the lake water clean and clear. Recreational lake use pumps $1.8 billion into Maine’s economy every year and supports more than 50,000 jobs. We need to stop the assault on the laws that protect our frogs, wetlands, drinking water, waterfowl habitat, and the clean lakes we love to swim and paddle in.

I and my fellow NRCM staff members will continue to be hard at work in our Augusta headquarters and at the State House to fend off the attacks on protections provided by the shoreland zoning laws. You can help, too, and I hope you will.

Let your legislator know you care about clean water and wildlife habitat and tell them vote against the assault on our environment in LDs 156, 159, 219, 341, 434, 872, and 888. These bills are a concerted attack on so many of things that make Maine a great place to live, hunt, and watch frogs.