The Chickadees and the “Snake” 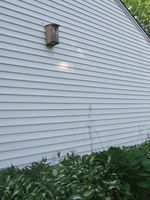 The birdhouse we assumed was empty.

Spring is a great time to consider all of the good work NRCM does to protect Maine’s wildlife and there habitats. Birds are, for me, the most noticeable. One of the things I love most about this time of year is the changing behavior of the birds around me. The males sing loud and strong as they set up territories and try to woo potential mates. Some hormone-fueled tough guys will even get into a tussle. Sometimes, as the birds go about their domestic duties, you’re not quite sure what they’re doing or why.

Such was the case as I watered my garden recently in my backyard. Off and on, I’d been keeping an eye on the birdhouse that hangs on the backside of our garage. A few years back, a pair of White-breasted Nuthatches had set up housekeeping in an old box that had since fallen apart. We’d put up this new box last year but it had remained empty of birds. I hadn’t noticed much activity around it this spring, either, so asked my husband (who’s a good eight inches taller than me) to check to make sure there were no bees or mice nesting materials piled up inside. As he jiggled the latch on the side of the bird house, out zipped a little Black-capped Chickadee. Ah-ha! Tenants! From that day on I’d kept my eyes and ears open and enjoyed the activity around the box.

To our delight, we discovered a pair of Black-capped Chickadees has moved in.

On this day, as I was watering my newly planted cucumbers and tomatoes, I caught a glimpse of one of the parent birds as it swung in through the entry hole of the nest box carrying a bug. The eggs had hatched! I turned off the water and listened to the baby birds begging for food inside the box. I stared up at it, imagining the four, six, maybe as many as eight tiny birds squeezed together inside, each one cranking its bill open trying to convince mom or dad that they, not their siblings, are most in need of that insect.To our delight, we discovered a pair of Black-capped Chickadees has moved in.

As the parent flew back out, the other appeared on a tree limb near where I was standing. It was scolding, giving its chick-a-dee-dee-dee alarm vocalization. It had a big juicy bug in its bill that it wanted to deliver to its babies, but it wasn’t about to go into the birdhouse with me standing between it and the box.

The chickadees came and went from the birdhouse without concern.

Or so I thought.The chickadees came and went from the birdhouse without concern.

I put down the hose and moved away. But the chickadee remained on the limb, scolding like all get-out.

I moved to the far side of the house, out of sight of the bird and still it sounded the alarm.

I peeked around the corner of the garage and realized what it probably was that had the chickadee so upset. A snake – or rather, the garden hose that perhaps to the chickadee looked like a snake—a creature most birds recognize as a predator. 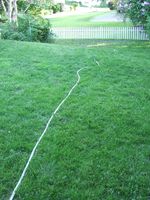 …until the ‘snake’ made an appearance.

To test my theory, I pulled the hose up the lawn a bit, away from the area, and watched. The chickadee skittered to a tree limb near it. I then wound the hose back up on its holder up near the side of the house and well away from the nest box, and walked away to watch. Sure enough, the feisty little chickadee flew in close to the hose, gave it another scolding as if to say, “I see you, don’t even think of coming after me or my family!” and then carried the bug to its awaiting brood inside the birdhouse.

Out of curiosity, I moseyed back into the backyard to test the response, keeping enough distance so as not to cause the chickadee family any potential annoyance. And, I brought my camera, in case they should be so accommodating.

I stood behind the brush pile on the side of the lawn, near the birdhouse, and waited. Within seconds, in and out went one of the parents, quickly followed by the other, each carrying a delicious bug, and neither concerned whatsoever by my presence.

One of the chickadee parents (shown here, sorry it’s out of focus) did not like what they saw down there on the ground and complained loudly about it!

One of the chickadee parents (shown here, sorry it’s out of focus) did not like what they saw down there on the ground and complained loudly about it!

Obviously my methods were hardly scientific. Perhaps the chickadee simply didn’t like that the hose was something in its immediate surroundings it hadn’t seen before. Admittedly, I’m an overly protective parent myself, so I can relate to that. In any case, I’m continuing to delight in our little chickadee tenants and look forward to what surprises await as the young fledge and head out into the summer, and the rest of their lives.

Once I put the garden hose back in its rightful place, life at the birdhouse returned to normal.

Explore Land for Maine’s Future areas where you can watch Maine’s wildlife.

NRCM’s My Maine This Week feature includes some beautiful shots of wildlife. View some today!