It was a bittersweet day on May 6th when we released our brook trout into the Pleasant River. The brook trout that we had cared for and raised for the past four months were ready for life on their own.  First, the tank was at the expected temperature of 11 and the trout were at the 750 Total Thermal Units they needed for release. In addition, the panels that surrounded the tank were removed gradually so that the trout were getting used to the outside light. Lastly, the nutrients in the yolk sac was completely absorbed and the trout were swimming up looking for food. They were ready but were we? 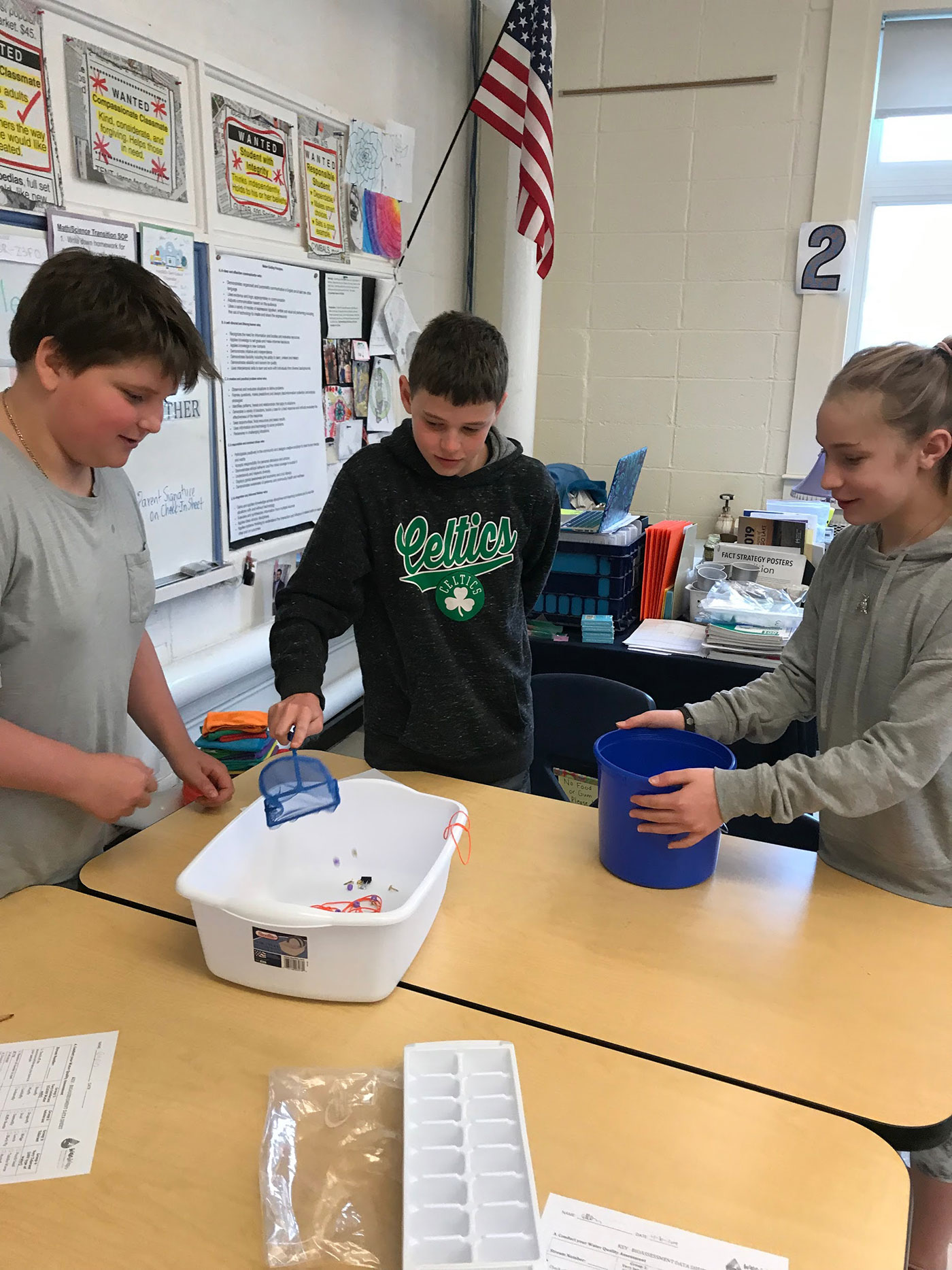 Students are simulating a bioassessment to look at what “macroinvertebrates” are living in their “stream.”

The week before the release students learned about benthic aquatic macroinvertebrates and reviewed the factors that impact survival for brook trout. After learning about macroinvertebrates, they participated in a bioassessment simulation. They learned that what they find living in their stream as well as what is not living in the stream provides information about the water quality of the stream.  To review the quality of water brook trout need to survive, students played a board game created by Portland Water District called Swim For Your Life. The object of the game is to get through each stage of the brook trout’s life cycle from Eyed Egg to Spawning Adult using as few lives as possible. Students draw cards for each life cycle stage that review the fate, death or survival, for their trout. 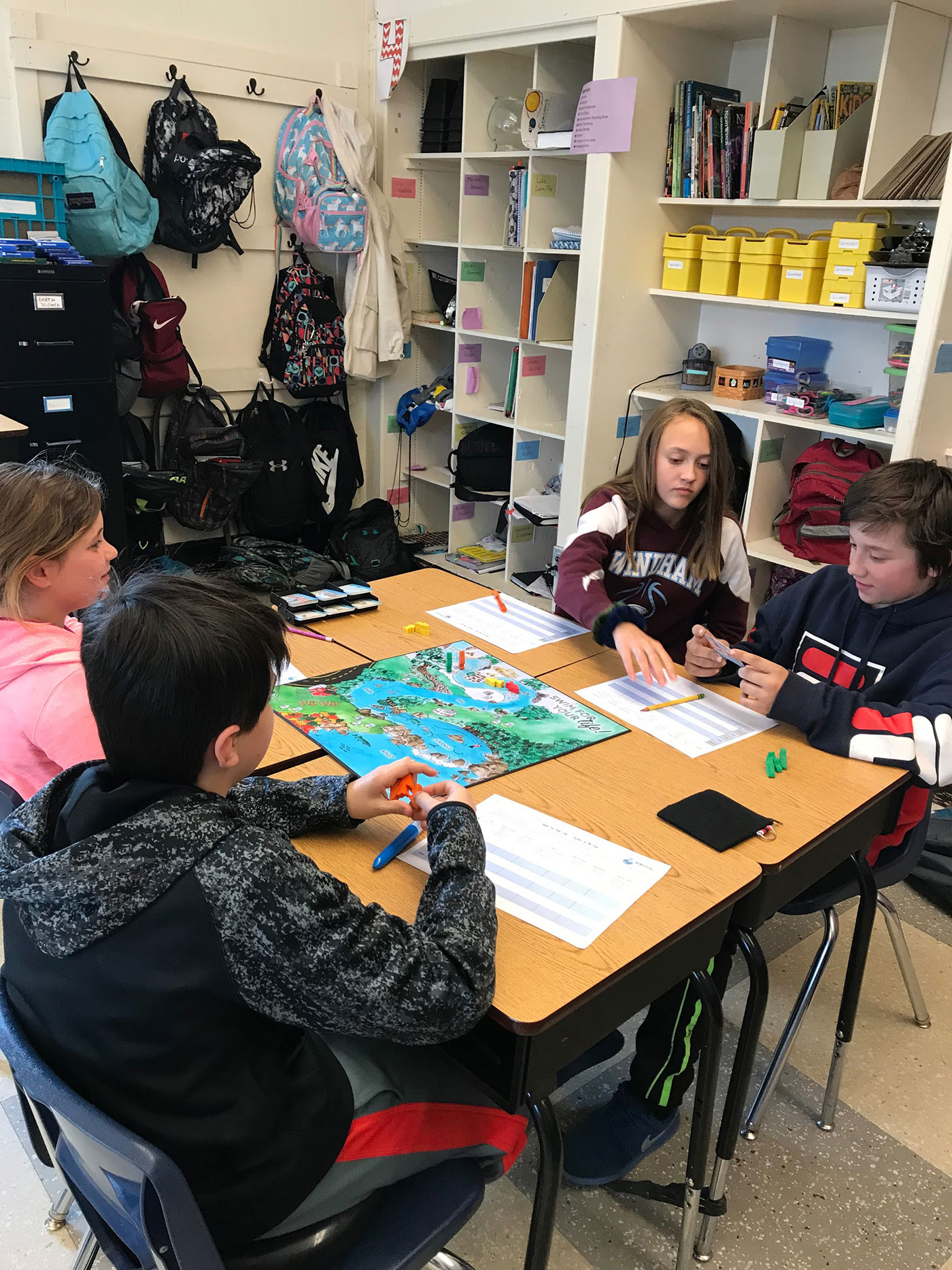 Students are playing “Swim For Your Life,” a board game created by Portland Water District that looks at the factors that affect brook trout survival.

The three days leading up to the release students began conducting tests and evaluating the waterbody and watershed characteristics to determine if the Pleasant River is suitable for their trout. First, they looked at the water chemistry by conducting pH, temperature, conductivity, dissolved oxygen, and turbidity tests and then compared the results to the trout requirements. Next, they participated in a bioassessment where they identified and quantified macroinvertebrates from the Pleasant River and determined the water quality based on their data. After, they went on a streamside hike to evaluate land and river characteristics that contribute to water quality. Finally, they evaluated all data to determine whether the water body will support their brook trout. They decided that the conditions were favorable and each student released at least one of the classroom trout into Pleasant River. 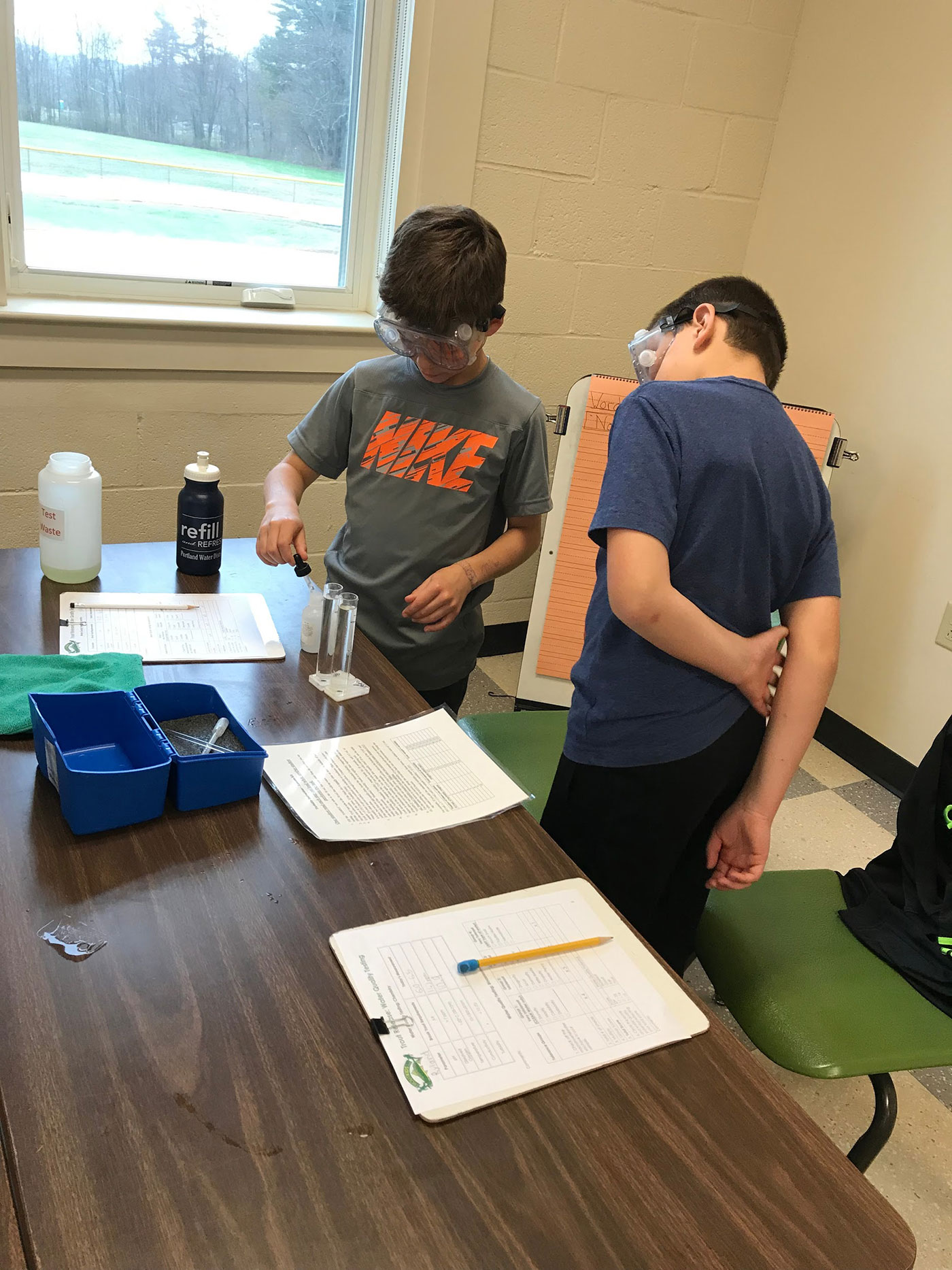 Students are testing the turbidity of the Pleasant River where we released our brook trout.

Students were filled with mixed emotions after releasing their trout. The classroom is quiet and an empty tank sits on the table in the back of the room. Students shared that they are sad that the trout are gone but are happy to know that they are living in a suitable river that meets their needs. They are proud of the care they provided and appreciative of the opportunity to raise the brook trout in the classroom. We want to thank the Natural Resources Resource Council of Maine for their grant that helped us purchase the materials we needed to raise our brook trout. It certainly has been a successful and memorable project. 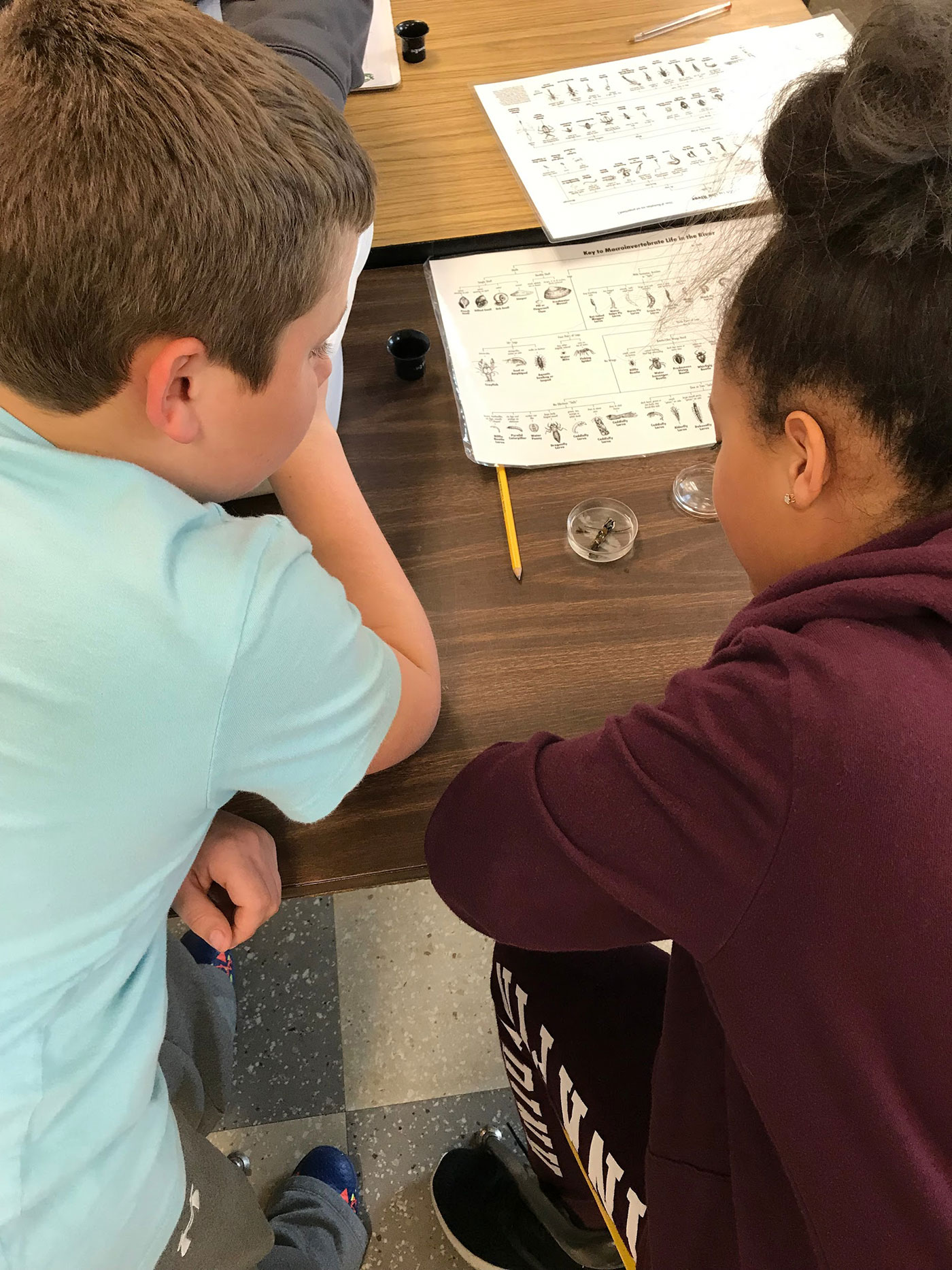 Students are completing a bioassessment that looks at what is living in the stream. They were excited to find so many macrointertebrates from Group 1 that are intolerant of pollution and need clear, cold, oxygen-rich water. 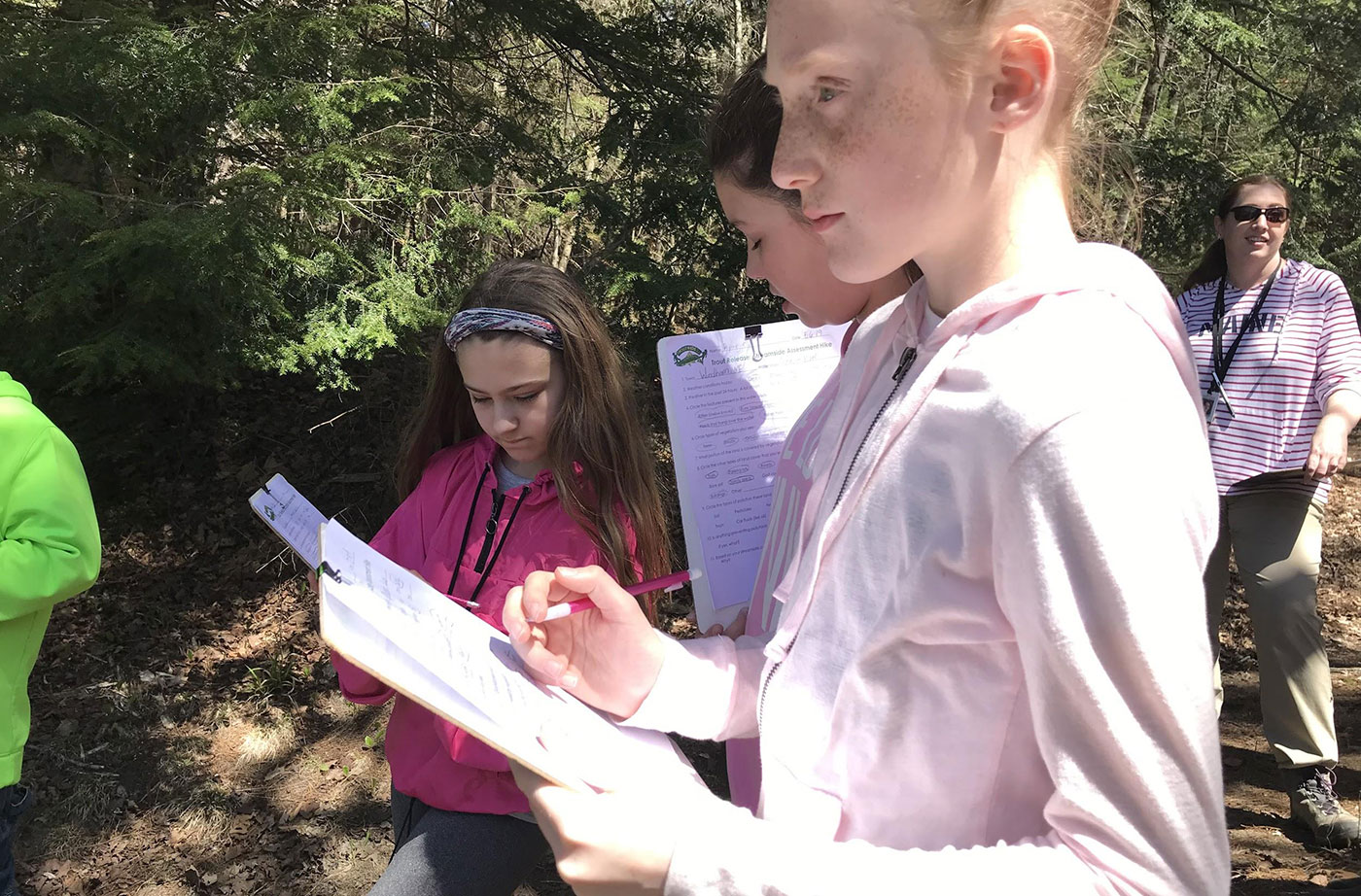 Students are collecting data on a streamside hike.