Did you watch the Super Bowl last night? I did, despite the New England Patriots not being there this year. It was a great game BUT the Super Bowl and associated activities and support produced more than 3.8 million pounds of CO2 emissions.

According to an article by the Rocky Mountain Institute, efforts are being made to “green up” the Super Bowl, and last year’s was the greenest on record. This year, the Super Bowl committee made use of carbon offset projects for the massive amount of energy the Super Bowl gobbles up. Efforts were made to recycle or resell materials such as temporary carpet, and as the article reports, there was a community tie-in involving tens of thousands of CLF bulbs. Nonetheless, I tend to share the cynical tone of the article when it comes to being able to really green up an event as massive as the Super Bowl.
But what always strikes me about any huge sporting event, especially the Super Bowl, is the sheer and widespread enthusiasm for it. As I watched the camera pan over the stadium packed full of people, I couldn’t help wondering how absolutely mind-blowing it would be if people were to get that excited about protecting our planet. 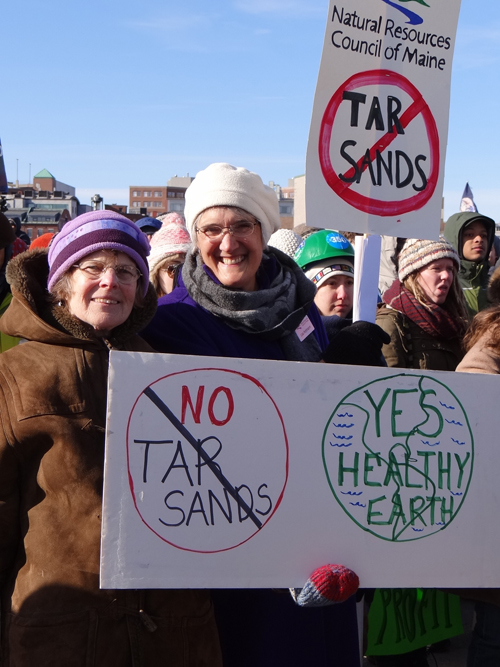 Cathy Johnson, NRCM’s North Woods Project Director, and I at the Maine State Pier, listening to Portland Mayor Michael Brennan and others speak out against tar sands oil coming to Maine.

I got a taste for that on January 26, when some 1,500 people gathered in Portland to protest the possibility of dirty, toxic tar sands oil being pumped through Maine. The outcry came from people across Maine, Vermont, Massachusetts, and Canada. A colorful array of signs and banners left no doubt as to why this crowd braved the cold on a January day.Cathy Johnson, NRCM’s North Woods Project Director, and I at the Maine State Pier, listening to Portland Mayor Michael Brennan and others speak out against tar sands oil coming to Maine.

Now we have the opportunity to send a similar message to Washington, D.C. Join NRCM for a massive climate rally on President’s Day weekend, February 17th. About 50,000 people are expected to attend, and I hope you will be one of them. In his inaugural address this year, President Obama said, “We will respond to the threat of climate change, knowing that failure to do so would betray our children and future generations.” We must keep the pressure on and send a strong message to Congress that the time for action on climate change is now.

Wouldn’t it be great if the $1.85 billion spent on Super Bowl ads over the last 10 years had gone toward clean energy initiatives and energy efficiency? Just the $4 million spent on some of the 30-second spots this year would go a long way here in Maine.

We may not be able to match the 120 decibels of noise produced in the Superdome by the Super Bowl crowd, but we can make our voices heard. If you are interested in joining us on the bus to our nation’s capital for the President’s Day rally, drop us an email at nrcm@nrcm.org. If you can’t make it, consider making your voice heard in other ways.

In an odd coincidence, the 2013 Super Bowl took place in the very same place where many of the people of New Orleans sought shelter during the terrible tragedy of Katrina. It’s wonderful that the city has recovered to the extent that it can again host an event the size and scale of the Super Bowl. But to keep massive climate-related catastrophes from occurring in the future will take immediate action by our elected officials.