“I never grow tired of seeing flying bats silhouetted against an inky-blue sky. It stirs up a special kind of magic in my heart.” 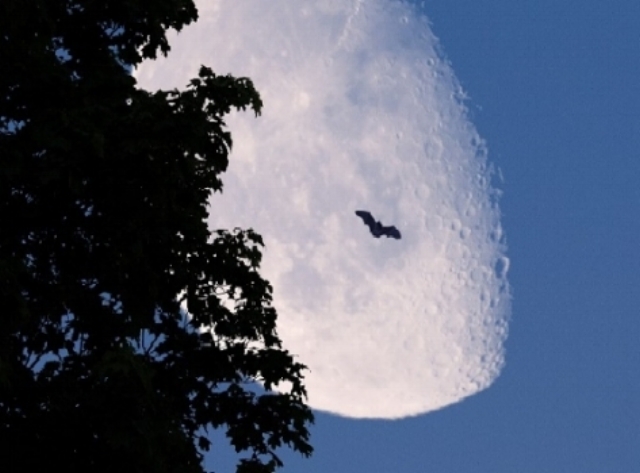 The other evening after dinner we were sitting around the fire in our backyard – (oh, what a simple patio and a fire bowl can do to encourage time spent under the stars!). As the light of day faded into dusk I told my daughter to keep an eye to the sky – for bats. As if on cue only a few moments later, we observed two big brown bats swooping through the twilight overhead. We gasped in surprise as one of them pursued a large dragonfly, disappearing into the shadows beyond the tree line. I never grow tired of seeing flying bats silhouetted against an inky-blue sky. It stirs up a special kind of magic in my heart.

These furry, winged mammals have been the subject of so much mythology, lore, and horror stories – it’s hard to know where to begin. For starters, there’s the old-wives’ tale that bats often get tangled up in long hair (simply untrue), and let’s not forget the widely held belief that most bats have rabies and will attack. Like other wild animals, bats can contract rabies but less than ½ of 1% of bats actually have the disease. It is rare to be bitten by a bat because they are shy and avoid people, biting only in self-defense if handled.

In my work, I enjoy setting the record straight and shedding light on these remarkable creatures. I have actually found that most people value bats as an important cog in the wheel of biodiversity and are keen to know more about their behavior and life history.

For example, some friends of ours have an old barn that is used by countless bats – and to my delight they actually “like” the bats and want to explore ways to re-side their barn so the bats can still access the warm eaves for roosting!

“Habitat Design” can take so many forms – in this case I’m helping them identify things their contractor can do to accommodate the bats, so they can continue to coexist with these harmless, fascinating creatures.

What are the bats actually doing in the barn, anyway?

Well, in the case of my friends’ barn the bats are using the barn in the summer as a maternity roost – a place where female bats seek safety and shelter for the “pupping season” to give birth, nurse, and wean their young (usually one pup per female in Maine). A good nursery site is a dry, sheltered crevice that gets enough daytime sun to stay warm throughout the night while mama is out hunting, and pups are left behind. Under the loose bark of a dead tree at the edge of a clearing, or in the eave of a building, for example. The females need these areas to maintain high temperatures so that the pups can thrive. You might wonder if bats overheat in such tight spaces with full sun, but for hairless pups, ideal temperatures can range as high as 100 degrees.

In order to produce enough milk to properly nourish her growing baby, a mother bat will eat vast amounts of insects each evening, equivalent to her own weight.

Successful maternity colonies are critical to the long-term sustainability of our bat populations.

The health and viability of bat populations is a growing conservation concern, both in Maine and throughout the world. Bats have recently experienced significant declines in the Northeast.

White-nose syndrome is a fungus that has caused mass mortality (several million deaths) among hibernating bats throughout the northeast and mid-Atlantic states over the past several years.

As a result of bat declines, insect-borne diseases and/or crop pest issues may be on the rise.

Three Things You Can Do to Benefit Bats and Their Babies

Landowners can help offset recent declines in local bat populations by providing bat boxes for summer maternity colonies because roosting sites are limited (dead or dying trees, and attics/barns where they will be left undisturbed). If installed properly and in suitable locations, they can make safe and comfortable nursery sites. 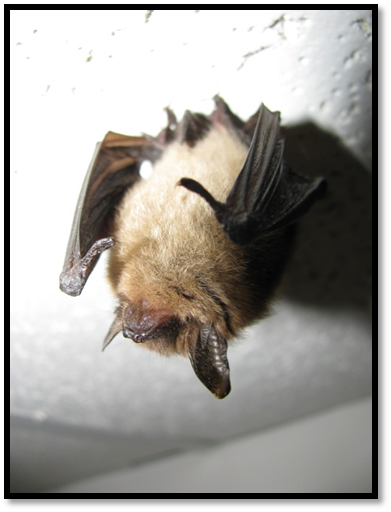 The northern long-eared bat was recently listed as threatened under the Endangered Species Act and is known to use bat roost boxes (photo: Jomegat).

The northern long-eared bat was recently listed as threatened under the Endangered Species Act and is known to use bat roost boxes (photo: Jomegat).

In an effort to tidy up our landscapes we often cut down or remove dead or dying trees. While this makes perfect sense if these trees are a hazard, in many cases trees can remain standing without any safety concerns. Snags and live cavity trees are highly valuable wildlife habitat for a large number of birds and mammals that use these structures for denning, feeding, or roosting.

3)  Avoid the use of chemicals on the landscape

Environmental contaminants, such as pesticides and heavy metals, are harmful to bats and their developing young (and a multitude of other wildlife).
Insecticides kill “pest” bugs, but they also indiscriminately reduce the overall prey base available to bats. Many of our birds that rely on insects are also experiencing declines due to lack of insect food available to them.
________________________________________
Did you know?  According to some estimates, a single bat may consume as many as 1,000 mosquitoes in just one hour!

Bat vision is probably better than our own, but they do use echolocation, a type of short-range “radar”, to move through the night air and find prey.

Deborah Perkins, M.S. is a wildlife ecologist with 25 years of experience in her field and a lifelong commitment to wildlife conservation. As sole proprietor of First Light Wildlife Habitats, she has partnered with landowners throughout Maine to create thriving wildlife habitats in their backyards, farms, and forests.