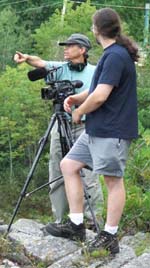 “Protecting the Nature of Maine: Fifty Years of the Natural Resources Council of Maine”

In celebration of our 50th anniversary, we worked with filmmaker Richard Kane to create an inspiring documentary film featuring some of Maine’s most important environmental victories and the people who helped to make them possible.

Stunning footage and dozens of interviews bring the threats and the accomplishments to life—and remind us what can be achieved when concerned people come together for a cause in which they believe.

Watch the movie trailer with updates .

Watch the full film, including an update added in 2015.

“Protecting the Nature of Maine” was nominated for a 2011 New England Emmy Award. Read the full press release about this nomination here.

Protecting the Nature of Maine features interviews and historic footage of more than 30 people, including: